Chichen Itza “at the mouth of the well of the Itza people”. Chichen Itza, one of The Seven Wonders of the Modern World, is an archeological park, was a center of commercial and religious power, nowadays considered one of the most important vestiges of pre-Hispanic Mexico. Chichen Itza is located in Yucatan Peninsula, specifically in Yucatan state, 3 km from the small town of Pisté and 80 minutes from Merida city. Chichen Itza is one of the most visited archaeological sites in Mexico; an estimated 1.4 million tourists visit the…

Chichen Itza “at the mouth of the well of the Itza people”.

Chichen Itza, one of The Seven Wonders of the Modern World, is an archeological park, was a center of commercial and religious power, nowadays considered one of the most important vestiges of pre-Hispanic Mexico. Chichen Itza is located in Yucatan Peninsula, specifically in Yucatan state, 3 km from the small town of Pisté and 80 minutes from Merida city.

Chichen Itza is one of the most visited archaeological sites in Mexico; an estimated 1.4 million tourists visit the ruins every year. It was one of the largest Maya cities and it was likely to have been one of the mythical great cities, the city may have had the most diverse population in the Maya world, a factor that could have contributed to the variety of architectural styles at the site, which contains many fine stone buildings in various states of preservation, and many have been restored.

Marvel yourself with the pyramid castle of the Mayan snake god Kukulkan and discover the traditions, secrets and wonders of Mayan Culture. Make a guided tour through its imposing Mayan vestiges, famous for the mathematical precision with which they were built.

The three best known of these complexes are:

The Great North Platform, which includes the monuments of El Castillo, the Temple of Warriors and the Great Ball Court.

The Osario Group, with the Osario Pyramid and  the Temple of Xtoloc.

The Central Group, integrated by the Caracol, Las Monjas and Akab Dzib.

After exploring the Mayan structures, you could also visit the “Sacred Blue Cenote” in Ik Kil, “Place of winds”, and refresh in the crystal clear waters of this natural well inside a cave covered with lush vegetation. 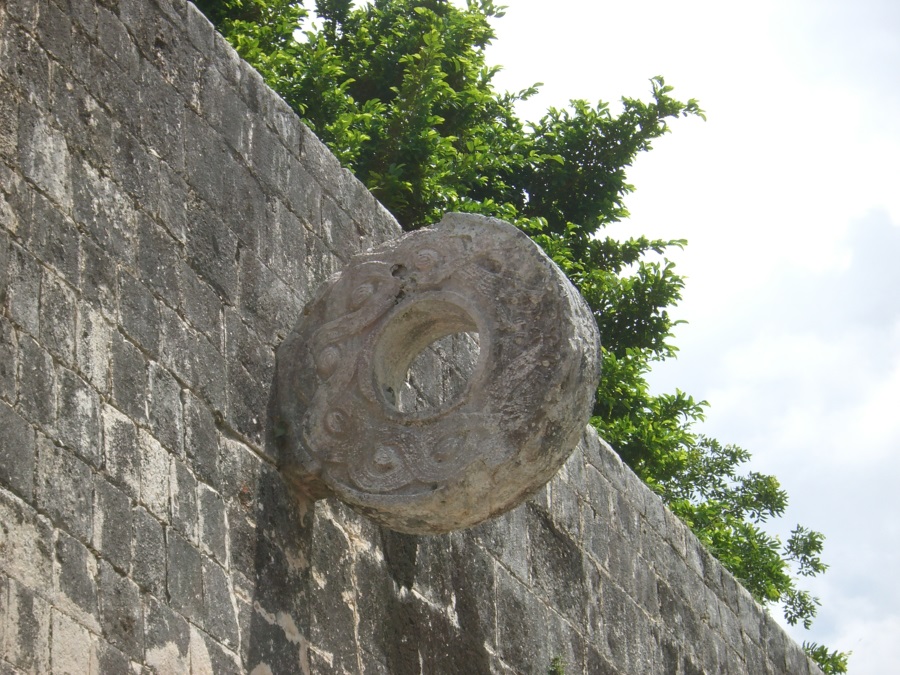 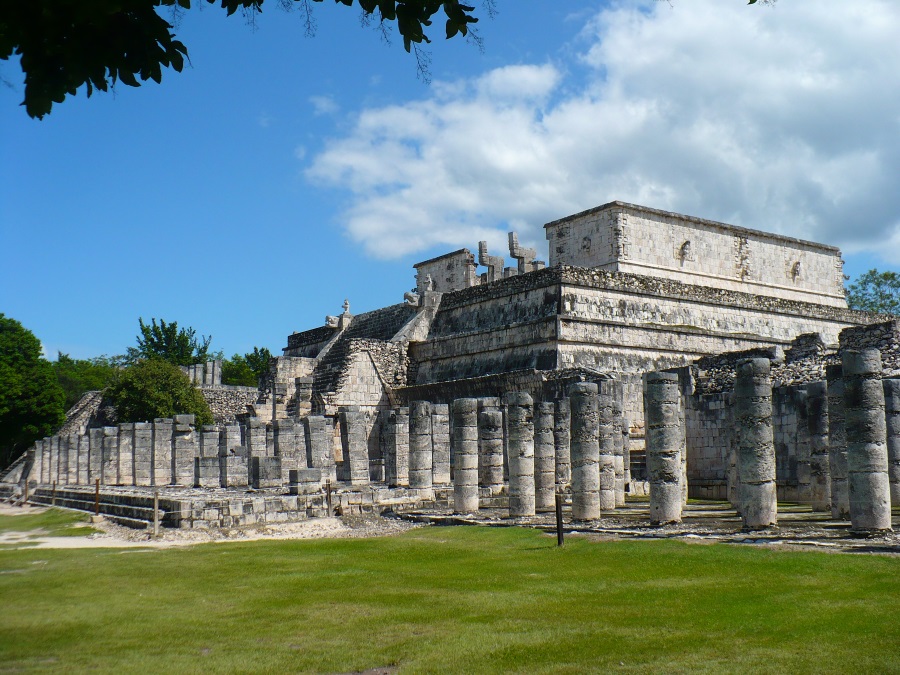 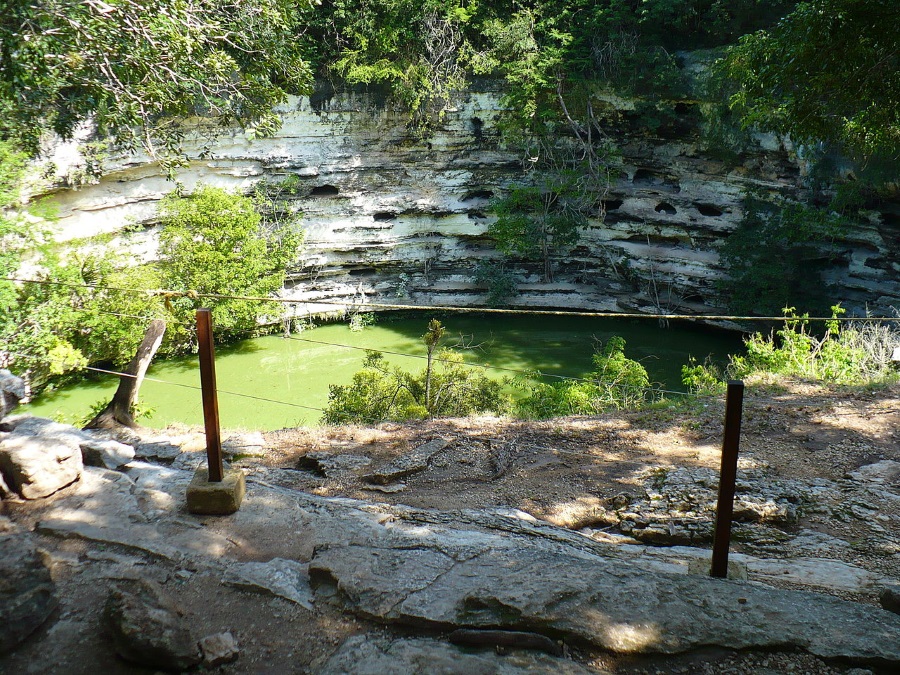 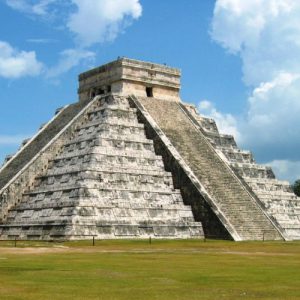 Also known as the Temple of Kukulkan a step pyramid stands about 30 meters high and consists of a series of nine square terraces, each approximately 2.57 meters high, with a 6 meters high temple upon the summit. On the Spring and Autumn equinoxes, in the late afternoon, the northwest corner of the pyramid casts a series of triangular shadows against the western balustrade on the north side that evokes the appearance of a serpent wriggling down the staircase, which some scholars have suggested is a representation of the feathered-serpent god Kukulkan. The principal pyramid of Chichen Itza archeological Site | Recognized as one of The Seven Wonders of the Modern World | Part of the The Great North Platform Group
2

The Temple of the Warriors complex consists of a large stepped pyramid fronted and flanked by rows of carved columns depicting warriors. This complex is analogous to Temple B at the Toltec capital of Tula, and indicates some form of cultural contact between the two regions. This temple encases  a former structure called The Temple of the Chac Mool which is at the top of the stairway on the pyramid’s summit. Part of the The Great North Platform Group
3

About 150 meters to the north-west of the Castillo is the largest and best preserved ball court in ancient Mesoamerica, measures 168 by 70 meters. The parallel platforms flanking the main playing area are each 95 meters  long. The walls of these platforms stand 8 meters high;  set high up in the center of each of these walls are rings carved with intertwined feathered serpents. At the base of the high interior walls are slanted benches with sculpted panels of teams of ball players; in one panel, one of the players has been decapitated; the wound emits streams of blood in the form of wriggling snakes. Part of the The Great North Platform Group
4 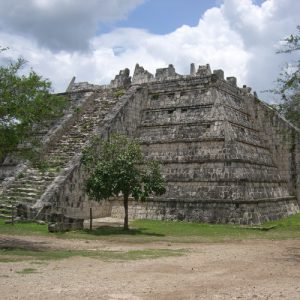 The Osario itself, like El Castillo, is a step-pyramid temple dominating its platform, only on a smaller scale, which appear to be oriented toward the second largest cenote at Chichen Itza, Xtoloc. Like its larger neighbor, it has four sides with staircases on each side. There is a temple on top, but unlike El Castillo, at the center is an opening into the pyramid which leads to a natural cave. Archaeologists today believe neither that the structure was a tomb and that the personages buried in it were priests. Part of  The Osario Group
5 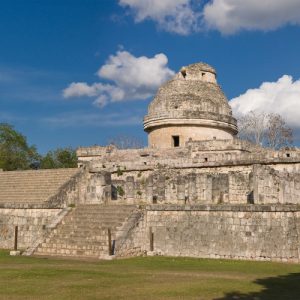 It is a round building on a large square platform, gets its name from the stone spiral staircase inside. The structure, with its unusual placement on the platform and its round shape is theorized to have been a proto-observatory with doors and windows aligned to astronomical events, specifically around the path of Venus as it traverses the heavens. Part of The Central Group
6 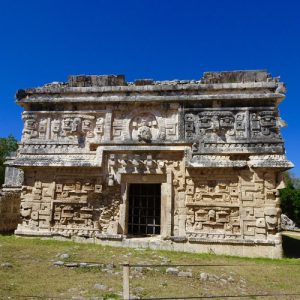 A complex of Terminal Classic buildings constructed in the Puuc architectural style; distinguished by its concentration of hieroglyphic texts dating to the Late to Terminal Classic. The Spanish named this complex Las Monjas but it was actually a governmental palace, just to the east is a small temple decorated with elaborate masks. Part of The Central Group
7 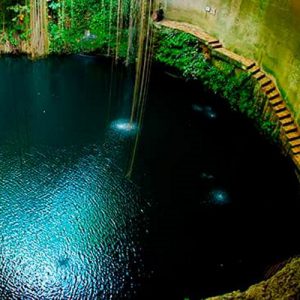 The Yucatan Peninsula is a limestone plain, with no rivers or streams. The region is pockmarked with natural sinkholes, called cenotes, which expose the water table to the surface. One of the most impressive of these is the "Cenote Sagrado", which is 60 metres in diameter and surrounded by sheer cliffs that drop to the water table some 27 metres below. The Cenote Sagrado was a place of pilgrimage for ancient Maya people who, according to ethnohistoric sources, would conduct sacrifices during times of drought. Archaeological investigations support this as thousands of objects have been removed from the bottom of the cenote, including material such as gold, carved jade, copal, pottery, flint, obsidian, shell, wood, rubber, cloth, as well as skeletons of children and men. Swimming is allowed 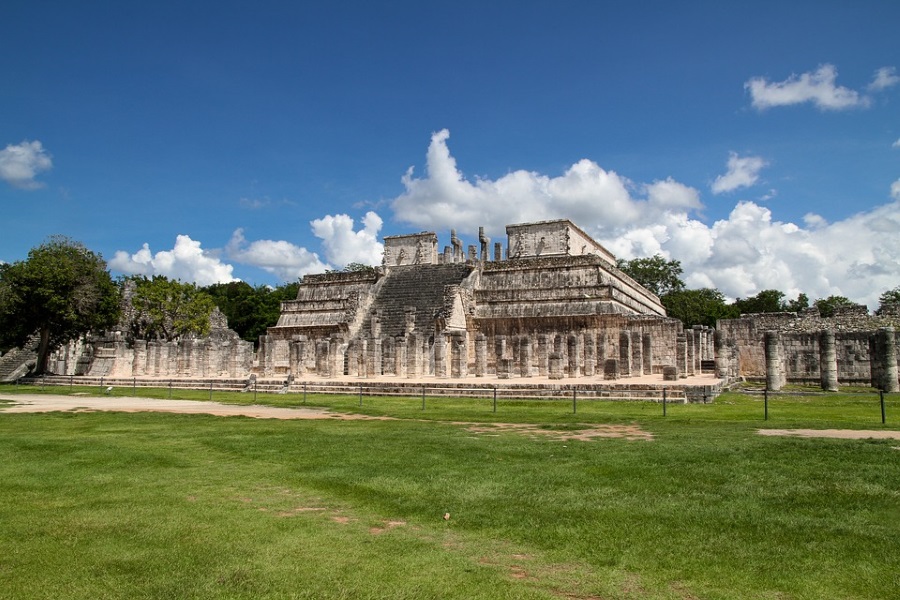 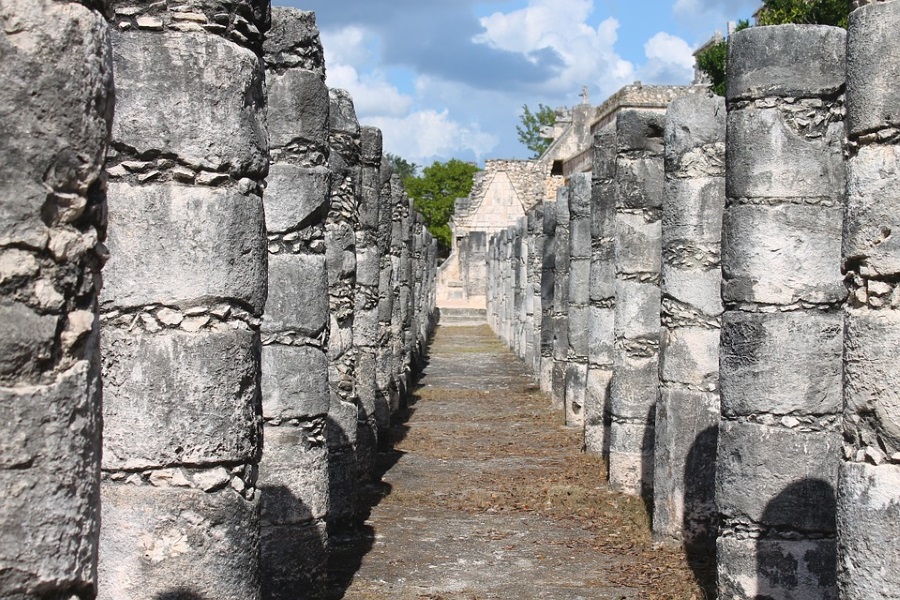 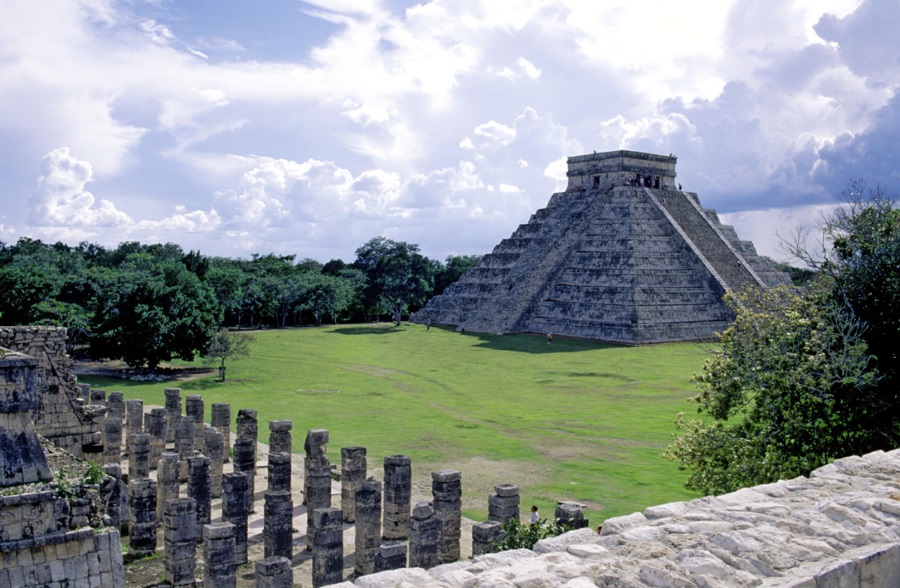 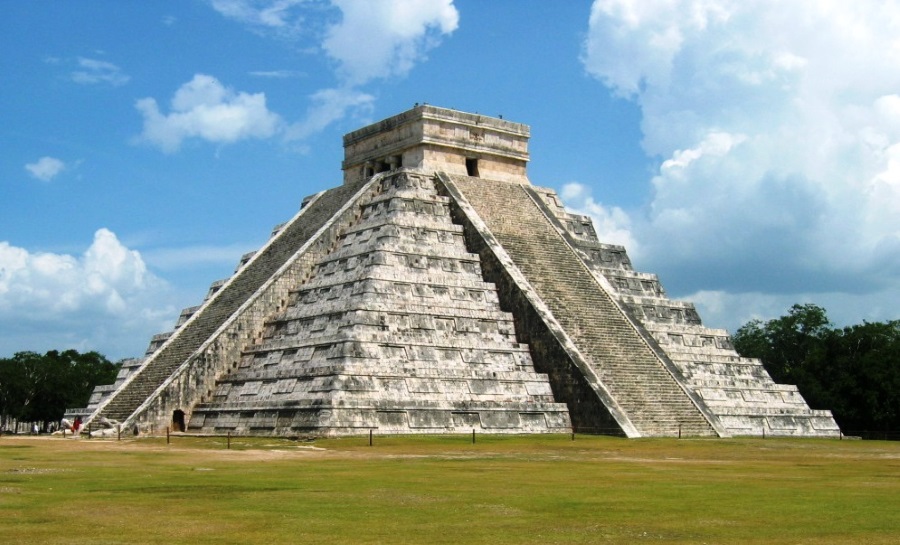 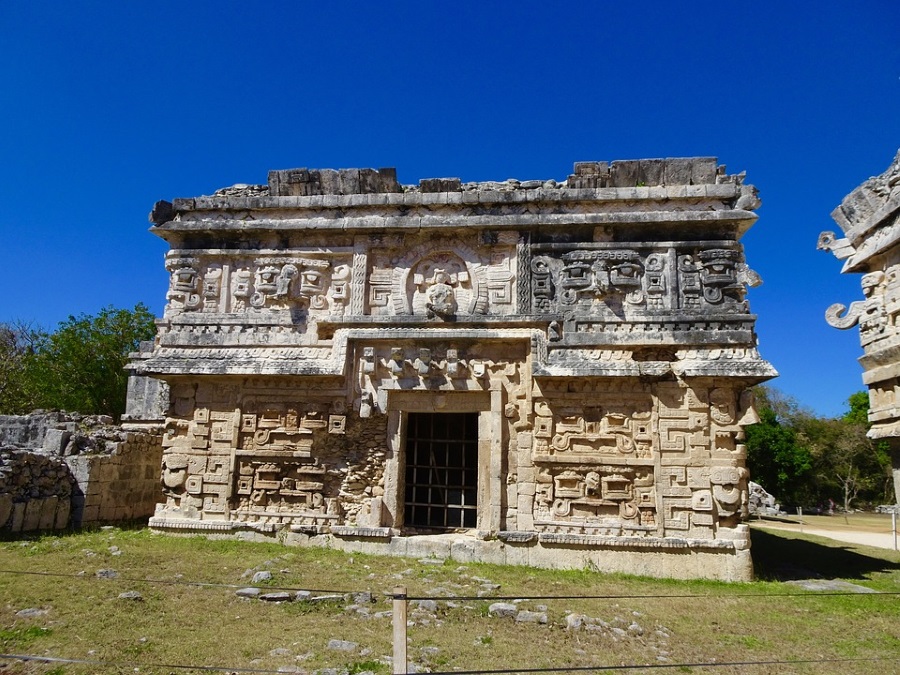